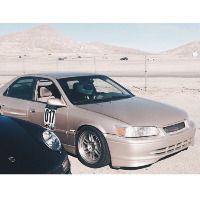 Hey Danny, I have a camry like the one you had here, can you help me out? I've got some Q's. I literally just made an account so I could ask you

yeah I saw, too bad I didn't have time to check, how much did you sell it for?

Hey, I sold the Camry a few months ago haha

Top Toyota Camry from the community

See whose at the top of the Wheelwell Camry Leaderboard