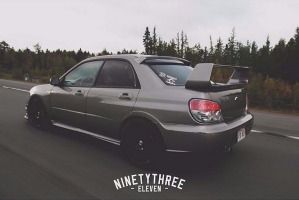 Great looking Hawk! Saw your inside the build feature and your story of first getting your car with little knowledge and learning through fixing things yourself sounds very similar to how it went with me and my Hawkeye.

Good luck with the build and check out my page if you're interested.

Your car is eye candy. I may need to steal your tire lettering:-> Have the police given you any grief over the yellow window tint? Car looks great!

Thanks! Surprisingly, I haven't had any issues with it. I've gone through some road blocks, but they never say anything, thankfully

One of my favorite body styles for the WRX.

See whose at the top of the Wheelwell WRX STi Leaderboard