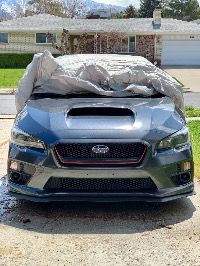 Very clean! hows that 2.2 holding up?

So far so good, the only problems I’ve run into in the 22(t) is the map sensor throwing a code and causing a rich condition

Not too bad, easy fix.

Yup, I haven’t put that many miles with the turbo, so I can’t say anything about reliability haha. I’m running stock TD04 wastegate pressure of 5psi but I plan to add 2-3psi more to have 7-8psi which should make the car feel close to a wrx. Ultimately, I want to save up for an STI swap (either 207 or 257) with matching drivetrain for a sort of sleeper build. That probably won’t be happening for a while though

If you Swap go with the 2.0L. They seem to be more reliable

Yeah that’s what I’ve heard, I guess the 207 is the better choice.

Thank you! It definitely needs a lot of exterior work, right now it looks like every other stock OBS 😂

Top Subaru Impreza from the community

See whose at the top of the Wheelwell Impreza Leaderboard