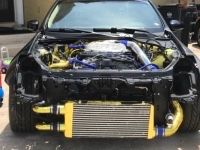 Looks so mean! And looks like it has the power to back it up, well done!

Top Infiniti G35 from the community

See whose at the top of the Wheelwell G35 Leaderboard