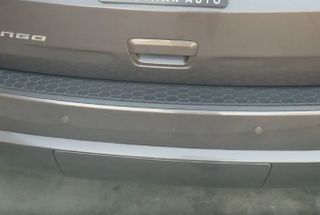 Our R/T didn't come with the factory tow hitch, so I decided to install it myself. After doing a bu

UPDATE: Our local dealer (Doug Smith Dodge) in American Fork Utah, activated our wiring harness for $50. We towed our 26 foot travel trailer with it and it did great! Just be sure to tow loads that large (anything over 2000 lbs, technically) with a load leveling hitch. We use Equalizer, which is both a load leveling and anti-sway hitch.

That's really interesting that the R/T is completely ready for the hitch but just doesn't have it installed yet. Nice writeup, though. It's nice to see mods that aren't the typical power boosters or suspension tweaks.

Thanks Wilson. If you're willing to get you hands a little dirty, it appears that you can save yourself about $1000 when buying an RT. Just don't opt for the "tow package" and install the OEM hitch later. Another thing I need to add to the article is that once you have installed everything, you have to go back to the dealer to have them "activate" the harness. Basically it's an update to tell the vehicle to turn on the wiring harness and electronic sway control, etc. Cost seems to range between $60-$120.

Thanks Andrew. Hope it's helpful!

I always wanted to install a hitch - this is very helpful!

I really like the way the new generation looks. The red leather interior is nice too!

No doubt! Now that the Xterra has been discontinued I'm going to have have to find another daily SUV when it's time...I'm wondering if the Durango should be on the list and how that stacks up against the 4Runner.

Top Dodge Durango from the community

See whose at the top of the Wheelwell Durango Leaderboard