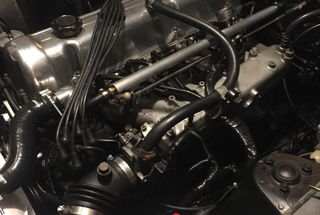 3 of 6 done. I had to replace my injector clips and instead of using an oem style, I went with the 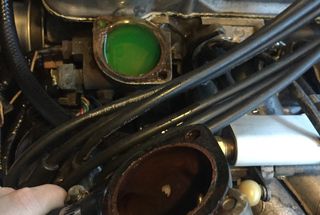 When you go to replace your thermostat and realize the previous owner didnt put one in...

I pulled my thermostat once when I was like 19 and knew no better. I learned later that winter how heaters work...well, actually how they don't work without the thermostat! Then, later, I learned how an engine makes LESS power without that thermostat and how it will actually make a little more power with a higher temp thermostat. Ya live, ya learn.

My PO stripped the heads off the screws while replacing my thermostat. Instead of replacing the screws he used a hack saw to create a groove for a flathead screw driver. It did not work. I broke my EZ outs on it and then the mechanic broke 4 more fixing this problem created by cheapness and laziness. The guy had enough parts Volvos around that these bolts just needed to be located, but laziness prevailed.

It's a common occurrence in Florida.

There's enough going on in this one photo to summon multiple nervous chuckles.

Those block off plates?

Its a cold start delete. The retro fit throttle body Im going to be running will have modern cold start provisions. Even w/o the cold start all you have to do is hold your foot on the pedal for a little to let it warm up. I think its worth the simplified engine bay.

Top Datsun 280Z from the community

See whose at the top of the Wheelwell 280Z Leaderboard