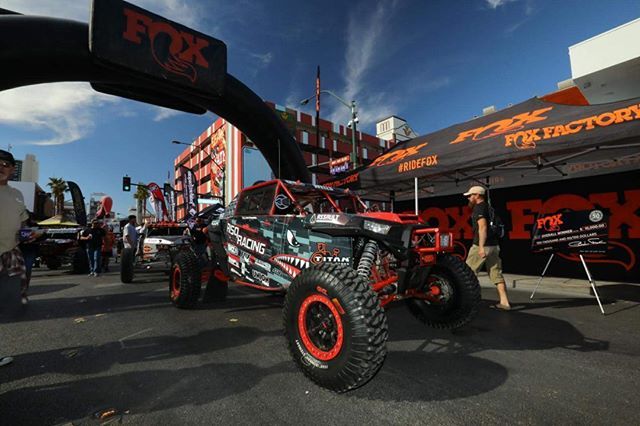 @risq_racing Mint 400 report: Kaden Wells and Rory L’Hommideau // Kaden left the line first in class due to his win at the Parker 250 earlier this year. His race went nearly flawless for the first two laps, maintaining his lead. On the second lap his front passenger shock started leaking, which on the third lap let go and pushed the whole shock through the shock tower and out of the hood. This could’ve taken him out of the race but they managed to nurse the car to pit B where we ghetto rigged the shock to the frame with a tow strap and fixed a few other little things and sent him off. He finished his third lap which we believe puts him in about 6th place on corrected time but it’s hard to tell where the BITD officials let multiple other races cut a huge portion of the track due to the trophy trucks coming through. We will update everyone once we know his official finish position. They currently have him listed in 11th but it is unofficial. . Corbin Wells and Dave Phillips left the line in 57th out of 69. Knowing the chances of a podium starting this far back was slim, they decided to drive a solid pace and see where they landed before the last lap and pushing or maintaining the pace depending on the positions. We had a quick tire change due to driver error early on the first lap, after starting our second lap our pits informed us that we were sitting in about 15-20th which we had no idea we were still running that good of a pace where we could push on the final lap and make up time for a better finish. At mile 81 on the second lap our steering rack literally snapped in half which folded the wheel in and ripped out brake lines. We were doing about 70 mph and had no control of the car at all going through giant bushes hoping we didn’t flip. After assessing the damage we decided it wasn’t something we could fix with the time given before trophy trucks started rolling through and called the race. #SoCal #AssaultTeam6 #AssaultMedia #Assaultland @polarisrzr @libbylibbywells